Isaac Kekemeke, a chieftain of the All Progressives Congress (APC) in Ondo state, has sent a strong warning to the opposition parties ahead of the state guber election.

Kekemeke, who was an aspirant and former chairman of the ruling party in Ondo, said the APC will win the forthcoming election with the help of the federal government.

Addressing his supporters in a viral video, Kekemeke said Governor Rotimi Akeredolu was the only guber candidate who has the massive political acceptability for the election.

He also said APC will no give rooms for Peoples Democratic Party (PDP) and other oppositions, adding that Eyitayo Jegede, a close challenger to the governor, will suffer defeat. 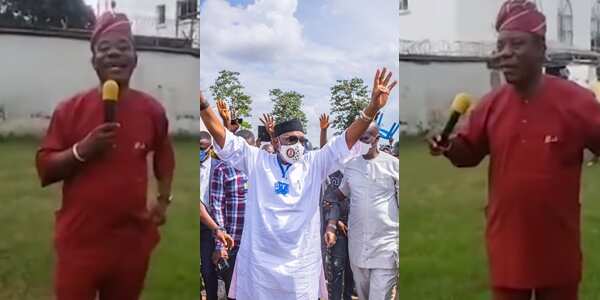 APC chieftain Isaac Kekemeke has threatened that the party will win the election “in all that cost.” Credit: Sahara Reporters.
Source: UGC

“We will use all those loyal to us to win this election at all costs. Eyitayo (Jegede) is only crying foul that they tore his posters in town. He has not seen anything yet.

“Governor Akeredolu is the one currently battling with him. By the time the Federal Government comes to the state for the election, he will run away… He (Jegede) cannot even withstand Yahaya Bello. I’m a militant with Niger Delta blood and we will give in all that cost”.

“We all should come together and ensure that we beat them in all local government. So, there is no room for them,” he said in a video shared by Sahara Reporters.

Earlier, Legit.ng reported that scores of supporters of the APC and the Action Democratic Congress (ADC) were injured in a fracas in Ondo West local government area.

The clash was not unconnected with the local government elections scheduled for Saturday, August 22. about 15 vehicles were destroyed in the clash.

Ondo Police spokesman, ASP Tee-Leo Ikoro, was said to have confirmed the clash and said many wounded persons have been hospitalised.