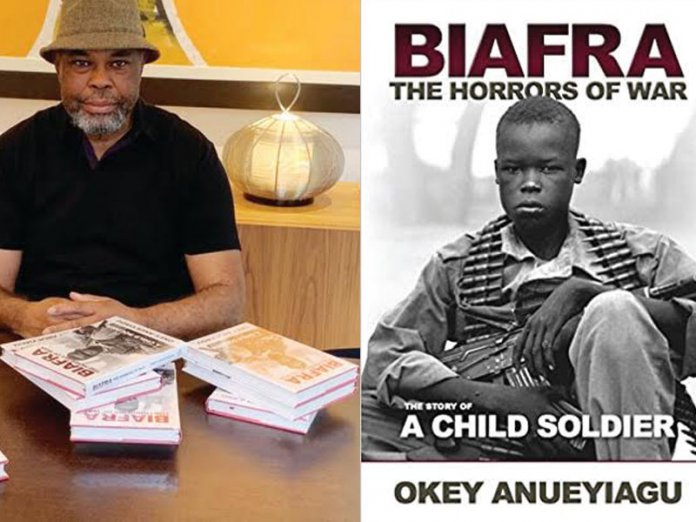 Dr Okey Anueyiagu’s recently-published riveting soul-stirring account of the Nigerian civil war, while unearthing the untold injustices meted out against his ethnic group, also points the way to a better future for Nigeria. Okechukwu Uwaezuoke reports

BOOKS
Clearly, not even the parish priest standing bewildered before a row of coffins in front of the altar, had the answers for his parishioners. The bodies in the coffins, which were 28 in number, included those of babies as well as of both the young and the old. Now, how could he explain to his baffled congregants why a family, which had successfully escaped the pogrom in northern Nigeria, had to die in such a gruesome way? Suddenly, his external circumstances became irrelevant and, figuratively speaking, he descended from the pedestal of assumed knowledge. Just a poor human spirit stood before his Creator, uncomprehending and questioning the workings of Divine Justice.

This account, among many tearjerkers, assails the reader in the riveting 277-page book, Biafra: The Horrors of War (The Story of a Child Soldier) by Okey Anueyiagu. The University of Rochester and Fordham University, New York alumnus finally, urged by the promptings of fate, has decided to share a story he had long been “reluctant to write”: a “story of a war in which [he] was an integral part from the beginning of the crisis in the North to its end in the East”.

The horrors are prefaced with a calm-before-the-storm narrative of his idyllic childhood years in the ancient commercial northern Nigerian city of Kano, where he was born in the mid-1950s. Just as the impressions of his remarkable parents – his dad, who was a journalist and a political ally of the late Dr Nnamdi Azikiwe, and his mum, whose sartorial elegance was legendary – gradually resolves into coherence before the reader, the author abruptly interrupts the latter’s reverie, wrenching him back to the realities of those pre-colonial years with the account of an Apartheid South Africa-style visit by the police to his parent’s home. A black-suited White policeman accompanied by two uniformed Black colleagues waiting to barge into the home of a perceived enemy of Her Majesty would be hard to imagine by most Nigerians born in the post-independence years. Yet, this was not an unexpected occupational hazard for a journalist, who made a career from passionately giving the British colonialists heartburn.

Other idyllic reminiscences of Kano loom out of the grey recesses of memory, each following on the heels of the other. Through them, the reader gains unrestricted access into the real human spirit basking in the sunny rays of privilege, laughs at his amorous childhood adventures and smiles indulgently at his youthful excesses. Such historical northern Nigerian icons as the Emir Ado Bayero, Aminu Kano, the Dantatas and the Rabius flit past before the reader’s subconscious in relatable human forms.

Soon, looming thought-forms of hate and envy, which have previously bunched up into a dense mass of dark clouds, descended into the brains of willing human tools and unleashed untold mayhem in their wake. Thus, they obliterated the author’s lingering sweet childhood memories of this city of his birth.

As the account cringes towards the events of 1966, the author’s emotion begins to rear its head as he challenges the curious labelling of the Major Chukwuma Kaduna Nzeogwu-led military coup as an “Igbo coup”. This labelling, he shows, is belied by the incontrovertible fact that only two out of 14 officers involved in the putsch were of Igbo stock. Furthermore, he not only recoils inwardly from the murder of the politicians by the coup-plotters – because he could empathise with their families – he also expresses even more disgust at the “very cowardly” killings of General Johnson Aguiyi Ironsi and members of his ethnic group.

Perhaps, it helps that Dr Anueyiagu light-heartedly interpolates his many digressions and flashbacks into the depressing narrative. Atrocities after atrocities pale in comparison with the others as beasts of hell in human cloaks prowled about in their genocidal mission. Not even those who successfully escaped the infernal scenario in the far North were spared from further torments in the hands of soldiers from the northern ethnic minority groups as they attempted to cross the River Benue bridge in Makurdi on their way to the safety of the Igbo-speaking areas.

Amid these horrors, the author nonetheless regales the reader with more of his welcome comic relief, inserted into his account of his life in his hometown Awka. The reader gets acquainted with his paternal grandmother, Igwego Dike Anueyiagu, who was also the elder sister of the renowned first Nigerian vice-chancellor of the University of Ibadan Professor Kenneth Onwuka Dike. Anecdotes of this is remarkable woman – whom he described as “a heathen who didn’t believe that Christianity was better than worshipping her gods” – entertains the reader as he waits with bated breath what comes next. Of course, no less entertaining are the author’s rambunctious exploits in his new rustic environment.

Nigeria’s invasion of the newly-created Republic of Biafra forces the reunited Anueyiagu family into another exodus, this time to Orlu where they first lived with family friends before being resettled in a refugee camp. More flashbacks and digressions as the story unfolds. The author’s and his family’s quick adjustment to life in the refugee camp italicises the tenacity of the human spirit and its ability to adapt even to the most inhospitable conditions. In desperation, families ate every plant or animal they could lay their hands on, as long as they were not poisonous.

This dire situation was further exacerbated when, at a stage in the war, starvation became the Nigerian government’s deliberate war strategy. The consequence of this was what an account of an unnamed mercenary reproduced in the book describes as “pictures of African kids with skeleton arms and legs and big balloon bellies, looking up at the camera” (page 203).

Meanwhile, more gory details bordering on war crimes on the part of the Nigerian federal troops emerge and begin to numb the reader’s sensibilities. It is as though Evil has figuratively speaking, moved in with its belongings. In this apocalyptic scenario, deep ethereal darkness descended upon the land. Despair reigned as the author on one occasion laments “that there was no end in sight to the atrocities being committed by Nigeria on us.”

Is it any wonder that the author now and then seizes opportunities in the no-holds-barred narrative to remind his audience that his is not a dispassionate account? This is especially since he was personally involved – yes, involved even to the extent of becoming a child soldier! For “all those whose hands were drenched in the blood of innocent souls”, he invokes “a divine punishment”. The Egyptian mercenaries, who flew the Russian bombers on behalf of the Nigerian government, he says “regarded Biafrans as infidels”, hence their ruthless deliberate targeting of civilians ( including women and children).

Steeled by his wartime experiences, Dr Anueyiagu muses in the book’s concluding part: “All I have left are memories of horror and questions about how it was possible for people to inflict such pain and sorrow on their fellow citizens and go about as if nothing happened. And the darkest part of the horror was that the world looked the other way. Those who looked into the matter, like Britain and the Soviet Union, were active participants in the perpetration of the highest crime against humanity – the killings of 3 million Igbo” (page 207).

Nonetheless, the renowned businessman and philanthropist chooses, like many of his Igbo kinsmen, to willingly forgive the past, even when it is difficult to forget the cold-blooded murder of his grandmother and the burning of the houses with her body in it, among other untold atrocities. As part of the South East (Igbo) Delegation the 2014 National Conference, he led the team that prepared and presented the region’s position to the nation.

His soul-stirring book, which allots 16 of its pages to historical and personal photographs, is highly recommended to all. This is despite the few typos, which now and then obtrude themselves, as the story unfolds before the reader’s mind’s eye.