– Nigeria’s defence minister, Salihi Magashi, has marked one year in the strategic office

– In an event marking the anniversary, Magashi charged the service chiefs to step up the anti-terrorism war

Nigeria’s defence minister, Major General Bashir Salihi Magashi (Rtd), has sent an important message to the service chiefs as he marks his one year in office.

A statement by his special assistant on media and publicity, Mohammad Abdulkadir, indicates that he charged the service chiefs and heads of other security agencies “to raise the bar of patriotic service to the nation”, The Nation reports.

Legit.ng gathers that Magashi spoke during the occasion to mark his one year in office, charging the service chiefs to step up the anti-terrorism war. 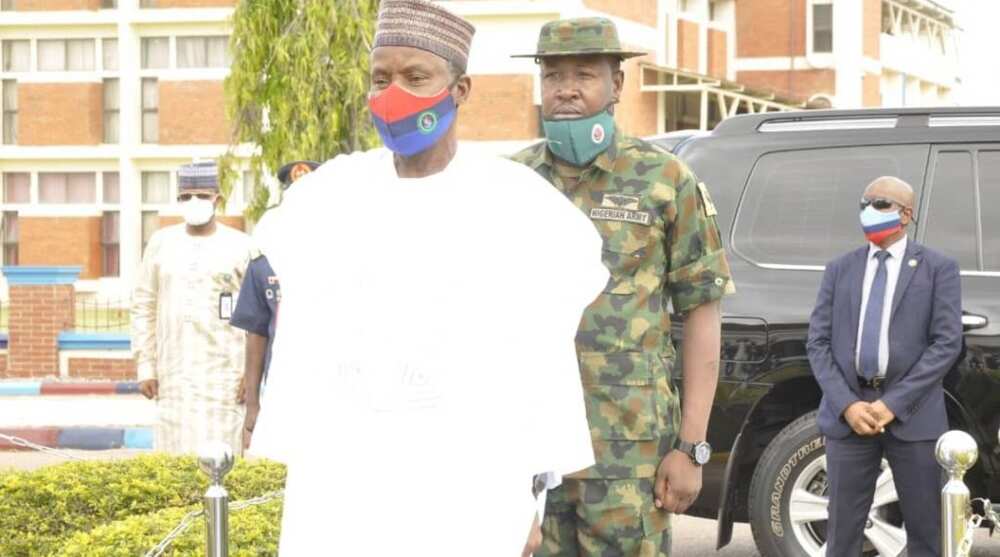 He restated his commitment to building “a robust Defence Sector that will usher in sustainable peace and security in the country”.

The minister also emphasized that security is the collective responsibility of all Nigerians.

He reiterated his loyalty to the Commander in Chief of the Armed Forces President Muhammadu Buhari and his commitment to rendering selfless service to the nation.

Magashi also expressed optimism that there is light at the end of the tunnel.

Meanwhile, the United Kingdom chapter of the Nigerians in Diaspora Monitoring Group (NDMG) on Tuesday, August 18, announced its alignment with international indicators in securing peacebuilding strategies for regions affected by Boko Haram insurgency.

The NDMG noted that the Multi-Sectoral Crisis Recovery Project (MCRP) of the present administration is proof that insurgents have been subdued in Bauchi, Adamawa, Yobe, Gombe and Taraba states.

In other news, the military airstrikes conducted by the Air Task Force of Operation Lafiya Dole has razed Bukar Meram, a major logistics hub of the Islamic State of West African States (ISWAP) linking other Island settlements of the Lake Chad.

Legit.ng gathered that some unidentified key leaders of the terror group were reportedly killed in the attack.

It was learnt that the facility located on the fringes of the Lake Chad in Borno, which also houses several of the ISWAP fighters and some of their key leaders, came under heavy bombardment after Surveillance and Reconnaissance (ISR) missions.