– Some of the housemates are loved more than the others, and some do not seem to have a strong fan base

– Legit.ng recently asked readers who they would prefer to stay in the game between Lucy and Wathoni and they gave varying replies

The BBNaija reality show has been described as a social experiment by organisers and fans. Perhaps this is because contestants are put in a house to live together for a period of time and see how they get along.

Previous seasons of the show have shown that being the friendliest housemates does not translate to being the winner of the show.

This BBNaija 2020 Lockdown season has played host to a number of contestants with different characters and attitudes.

Two of the female housemates who have also got fans buzzing on social media from time to time are Lucy and Wathoni. BBNaija: Legit.ng readers decide who they would like to remain on the show between Lucy and Wathoni
Source: Instagram

The duo cannot be described as the closest housemates but they both stand out for different reasons.

A number of people on social media seem to find Lucy’s high-handedness entertaining as well as her tantrums, tears and other characters. This is obvious, being that she has never been part of the bottom eight housemates on the show during eviction.

Another housemate who has a growing fan base is Nigerian-Kenyan, Wathoni. She seems to have captured people’s hearts with her innocent and calm looks. However, some fans on social media have accused her of being a serial gossip. BBNaija: Legit.ng readers decide who they would like to remain on the show between Lucy and Wathoni
Source: Instagram

In order to determine who the fan’s favourite between the two is, Legit.ng organised a poll for its readers on social media.

Interestingly, Lucy topped the poll with 35.8% voting for her to remain on the show, while Wathoni tanked with only 18% votes.

See the poll below:

Meanwhile, there are now 15 housemates in the BBNaija house left with a chance to win the N85 million grand prize.

Just recently, the fifth housemate to be evicted from the show, Kaisha, spoke during her media rounds on what she thinks about the other housemates as well as her feelings for Neo.

She said she felt like she did not show all of herself in the house because she was trying to understand the housemates and get to know them.

In a chat with Legit.ng, the former reality TV star spoke about her father who some Nigerians described as a billionaire.

Kaisha said that it is just an exaggeration of her father’s status. Noting that her father is a traditional leader and also into politics, the young lady said that it does not mean that they are very rich. 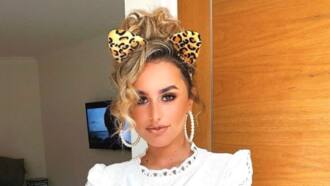