– A member of the APC on Saturday, August 22, shared a video of the elder statesman in London

A video of President Muhammadu Buhari’s nephew, Mamman Daura in high spirits has emerged following conflicting reports that he had been flown to the United Kingdom for medical treatment.

Legit.ng gathered that Johannes Tobi Wojuola a member of the president’s media team shared the video on his Twitter handle @Johannxs on Saturday, August 22.

Released in the wake of rumors stating that the president’s nephew was flown abroad for medical treatment, the video showed Daura dressed in native with a white cap whilst on a phone call.

From the video, the 80-year-old is seen to be in good health and high spirits as he was walking around the room speaking in Hausa. 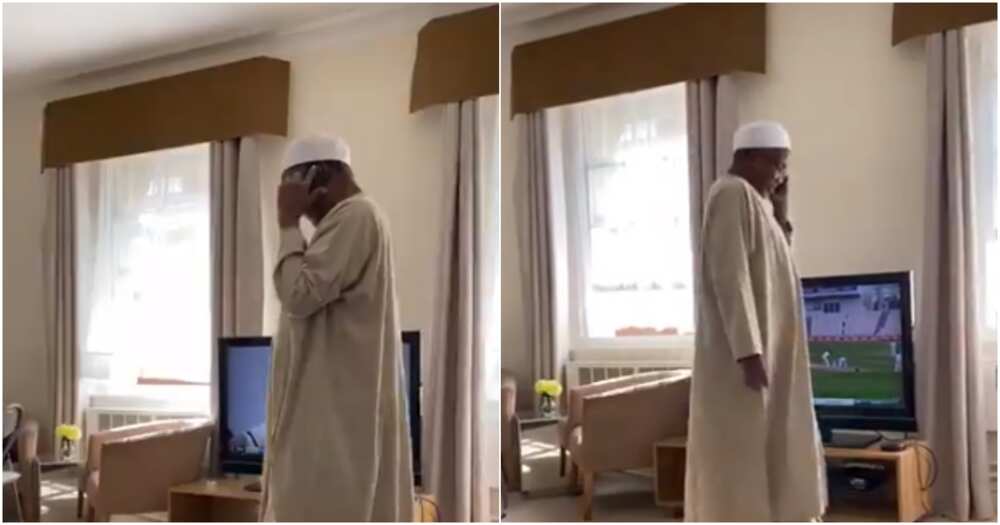 “Baba Mamman Daura, hail and hearty. Spritely as always! The man who our unfortunate media claimed to have been flown abroad for treatment. Our media is at its worst. Anything goes. Any damn ridiculous thing. All for clicks? No fact-checks, just conjectures and fake news,” Johannes tweeted.

His family had earlier confirmed that the elder statesman flew out of the country for a routine medical checkup, but it was not an emergency.

Denying claims Daura’s family member said: “Mallam did not travel to the UK to treat COVID-19 or because of any medical emergency. He is in good health. He went for his regular check-up and there is nothing strange about that.”

This is coming a few days after, a report by Daily Trust claimed a nephew of President Buhari was flown to the UK for medical treatment.

The newspaper said a presidency source whose name was not disclosed confirmed that he travelled for his regular medical check-up, which was delayed because of the COVID-19 restrictions.

It was reported that the 80-year-old was flown in a private jet to the UK on Wednesday, August 19.

However, another newspaper, Leadership, reports that the presidency has spurned reports claiming Mamman Daura had been flown out of the country for a medical checkup.

The newspaper also cited an anonymous presidency source as saying the president’s nephew was in sound health. The source reportedly said that the elder statesman only travelled to London for a long-scheduled business trip, noting Daura is in good health.

Meanwhile, Legit.ng reported that family sources have made clarifications on the health and trip of Daura who recently travelled to the United Kingdom (UK).

A family relative who spoke with journalists on Wednesday, August 19, revealed that although it is true that Daura made a trip to the UK, he is in good health and has not contracted COVID-19.

The relative said that the president’s nephew went abroad for his usual medical check-up and has no breathing problems as some online media outfits have claimed.

In other news, there was political outrage recently when Daura, spoke about the 2023 presidency, with the elder statesman saying the best man should be voted for to succeed his kinsman.

Speaking with BBC in an interview, Daura said the 2023 presidency should be prioritised on qualification and competence, not on tribe and regional interest.

According to him, whoever has to succeed his kinsman must be on what he has to offer for the country in terms of economy, security and socio-political development.

Daura said Nigeria does not need a rotational presidency which he said has been done three times. He, instead, posited that Nigeria must look beyond the region to elect its new leader in 2023.