As the West African Senior School Certificate Examination (WASSCE) kicked off across the nation, rare pictures of a student in Gombe who tested positive to Covid-19 sitting for a paper has surfaced online.

What is so different about his pictures is that despite his positive status, he is writing his exam as his invigilator stands behind him in PPE.

According to the twitter handle of the Gombe state public health emergency operation centre, the pictures were taken while the boy was writing his mathematics exams on Monday, August 17.

In the first picture frame, the boy appears focused on his exam questions as he wore a face mask. Behind him, a TV is on which is hoisted above a mackintosh hospital bed.

His supervisor stood hands behind him looking above the head of the student. The second frame shows the man holding what looks like a question paper in a nylon jacket as he posed for the camera.

Many people had things to say about the pictures as they commented on the environment the boy was writing the exam in. 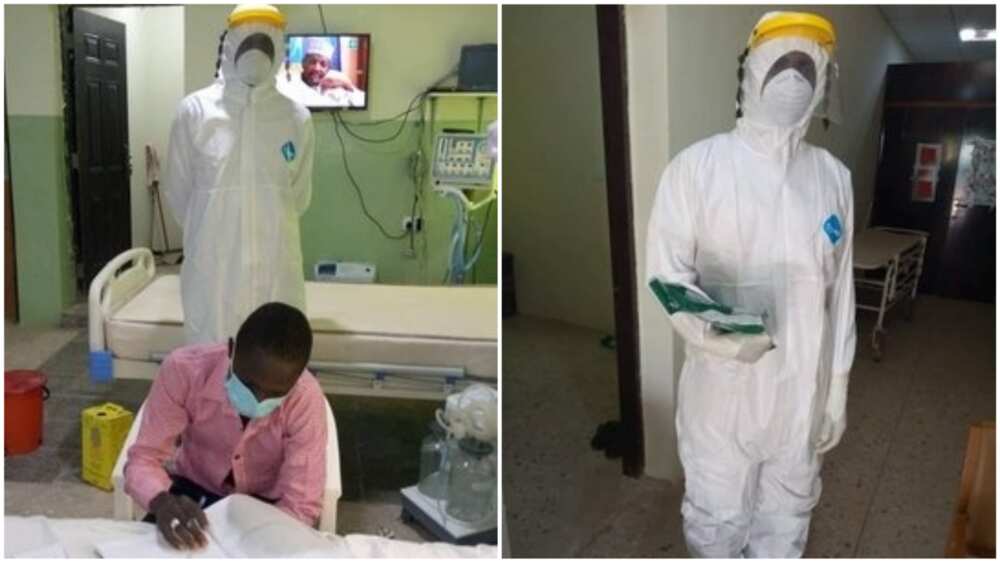 A collage showing the student and the invigilator. Photo source: GombePHEOC
Source: Twitter

Below are their reactions:

The Director-General of Nigeria Centre of Disease Control, Chikwe Ihekweazu, also commented on the tweet:

WAEC on its official Twitter page called on students not to patronise those who publish other versions of the said timetable.

The council’s head of public affairs, Demiaus Ojijiegu, disclosed that the examination will begin on Monday, August 17, and expected to end on Saturday, September 20.

Ojijiegu advised students to abide by all protocols stipulated by the federal government to prevent the spread of the coronavirus pandemic.

In other news, a smartphone developed in Uganda, G507, allows users to take their temperatures and detect a potential Covid-19 symptom, serving as a brilliant option to temperature guns. The phone was developed by a tech company in the country called SIMI Mobile.

A video documentary was revealed that the phone has an inbuilt infrared sensor to enable it to carry out the function.