The online video game Roblox is under fire for a seedy ‘red light district’ made by hackers that exposes kids to digital sex parties, graphic images, and racist messages.

Roblox is a gaming site where more than half American players are under the age of 16.

The website allows users to create blocky Lego-esque avatars and program their own games or play games created by other users.

But the gaming platform, which today boasts 150million monthly active users, has a dark underworld where players hack the system to create ‘Condo’ parties where users simulate sex and are exposed to naked imagery.

Now there are concerns that children may be unsafe playing the popular game and could be prey for online predators.

User Dazzely, a 19-year-old player whose real name is Dylan Lemus-Olson, has exposed Roblox’s dark corners on his YouTube channel, where he has more than 53,000 subscribers.

‘Condo videos are basically, um, they’re like the dark side of Roblox,’ Lemus-Olson said in an interview with CBS News. 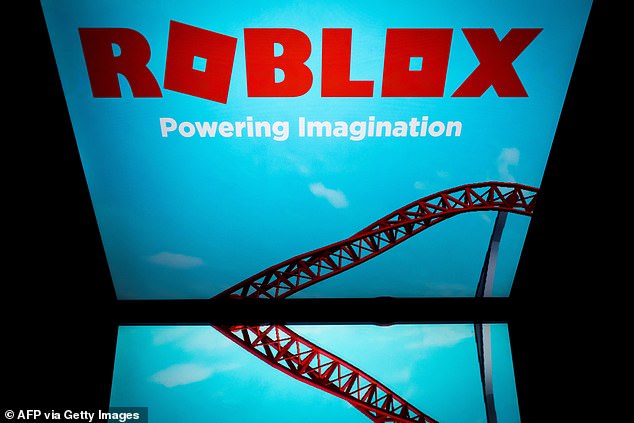 The online video game Roblox is under fire for its secret ‘red light district’ that exposes kids to digital sex parties, graphic images, and racist messages 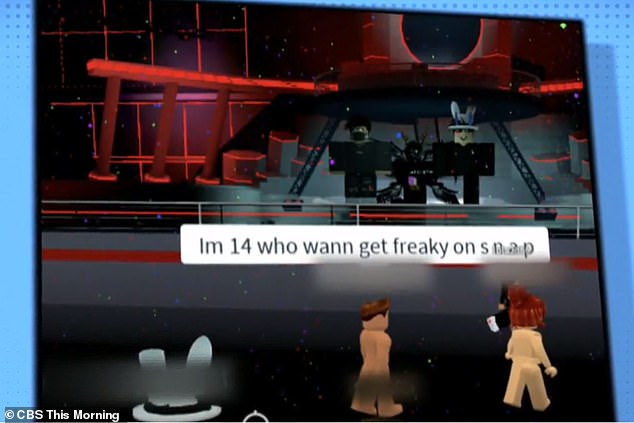 Now Roblox is facing scrutiny for hidden dangers in the online game after hackers created zones that block child safety filters and allow avatars to roam naked and simulate sex movements. In this case one avatar appears to be soliciting explicit content despite claiming to be 14

He said he discovered the underworld of the gaming website in 2017 when he received a message on Discord, an online chat application frequently used by gamers, with a hyperlink to a Roblox game called ‘The Condo.’

He was taken to what resembled a small condominium that was full of naked Roblox avatars.

When Dazzely arrived he was shocked and said ‘What the f*** is this’.

Someone had hacked the Roblox child safety filters and characters were sharing lurid messages, curse words, and offensive racial slurs.

Dazzely recorded his screen and posted the video to YouTube where it blew up, shedding light on the twisted side of the popular children’s gaming platform.

Discord, which is big among gamers, contains numerous platforms or ‘servers’ where users can discuss explicit Roblox content.

Fast Company interviewed 17 members of Discord ‘Condo’ servers, and 14 who confirmed they operated Roblox Condo games were between the ages of 13 and 17. Three provided photos of their school IDs to prove they were underage.

Roblox hasn’t disclosed the ages of its users but says that a majority of them are under 18 and at least half of the US kids are 16 and under on the platform.

‘Roblox has no tolerance for inappropriate content or behavior. It is our responsibility to keep our platform safe, and we work relentlessly to create a safe, civil, and diverse community,’ Roblox said to DailyMail.com in a statement.

‘As with any community, there are a small number of bad actors who attempt to undermine the rules, and we continue to evolve our platform and policies to combat this challenge,’ the spokesperson added. 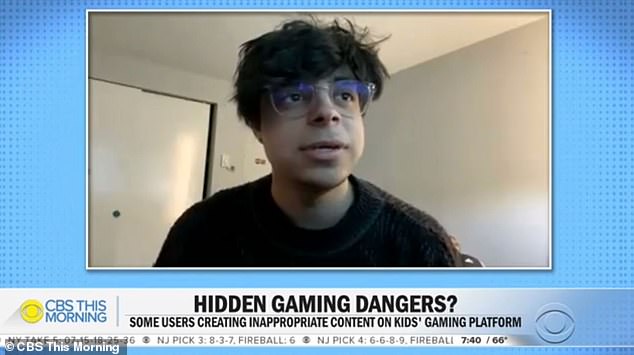 User Dazzely, a 19-year-old player whose real name is Dylan Lemus-Olson, has exposed Roblox’s dark corners on his YouTube channel, where he has more than 53,000 subscribers. ‘Condo videos are basically, um, they’re like the dark side of Roblox,’ he said 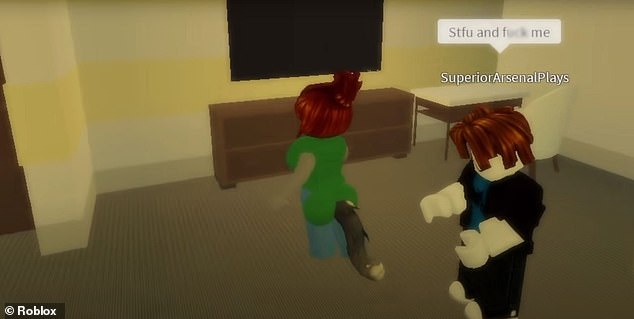 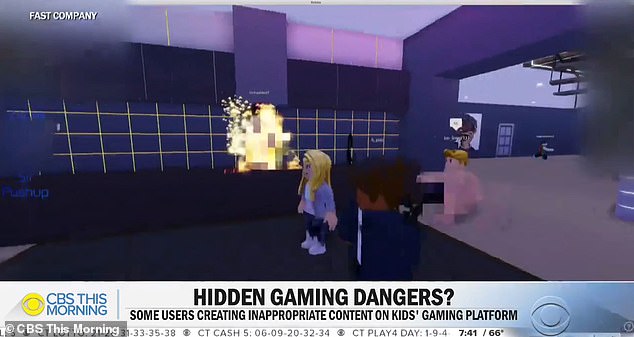 The game has been exposed for having ‘Condo’ parties where users roam naked and simulate sex. A naked player pictured on the right

Now a growing challenge for the platform, which will turn 16 in September, is to make sure its safe for young users.

In a Roblox game entitled ‘Haha ~~ ;)’ a party house created by a group known as The Cons created a sex den that showcased an array of sex toys, private rooms upstairs furnished only with beds, and in the basement a torch-lit sex dungeon.

Avatars would go naked and could choose among more than 25 different body positions and movements simulating sex acts.

Louisiana mom Deranda Bordelon was playing a Roblox game called ‘Adopt Me!’ with her eight-year-old daughter when someone grabbed the mother’s character and whisked it off to a bed to simulate a sex act.

‘She snatched me back up, and now she’s doin’ stuff to me,’ Bordelon said.

‘All of a sudden she brought me to this other room and took her clothes off and was asking me to take my clothes off and just all kind of, you know, adult stuff that shouldn’t be for kids,’ she added.

‘It’s not appropriate for kids. I’m very disappointed in the game,’ her fiancé Jason Handley said to CBS News.

Roblox has censored the word ‘condo’ due to the sex parties, but gamers can gather on Reddit’s gamer groups or on Discord servers to discuss and post links to these games.

YouTube videos depicting these explicit games are allowed online, but with an age restriction. 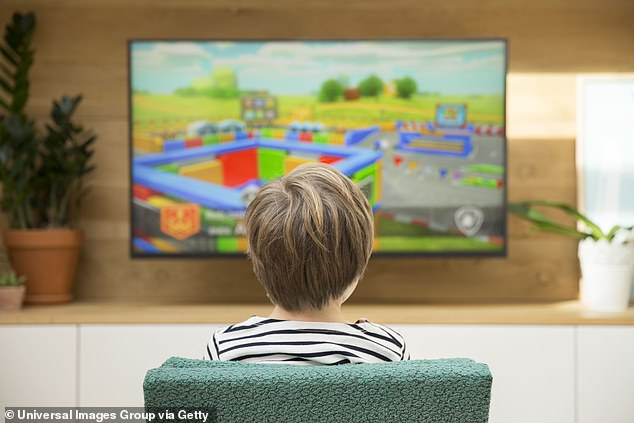 Members who create these ‘Condo’ parties described themselves as longtime Roblox players who got into condos for the thrill, fame, and money involved. Hacking gives users prestige and users can sell in-game administrative privileges such as allowing a player to fly and teleport or manipulate other users’ avatars.

Other condo themed servers are inundated with racial slurs and disturbing hate speech. One Discord server devoted to Roblox condo games has an active user with the username ‘White Supremacist004’.

Even with the hacked red light districts on the platform, Roblox has previously been praised by child safety advocates.

Advocates say the platform safeguards users by banning cyberbullying, harassment, violent behavior and sexual behavior. Players under the 13 must enter a birthdate to create an account, though it’s not verified, and they’re banned from receiving direct messages from other users unless a parent adds those names to a friends list. 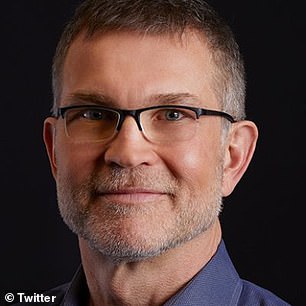 CEO and co-creator David Baszucki: ‘We want kids to have an opportunity for free play. Roblox allows them to get together, make their own rules, go together wherever they might want . . . and create together, build together, and in many cases, learn together’

The game also has a battalion of more than 1,600 human content moderators censoring in-game chats and responding to problems.

But quietly, the platform was waging a war against some of its own users who have exploited the game to upload explicit content, host sex parties and curse.

‘This is an adversarial kind of situation…we know that the bad actors are not going to stop,’ a top Roblox safety representative said.

Roblox, which is valued at $4billion, has seen major success and players pour more than $490million into the platform via mobile devices in the first year of 2020 alone, according to Sensor Tower data.

Roblox projects that its user-developers will earn more than $250million from selling access to their games and online creations this year.

A December 2017 study by Comscore found that kids between the ages of five and nine spend more time playing Roblox than doing anything else online on PC’s.

For those between nine and 19, only YouTube surpassed the game in online consumption.

CEO and co-creator David Baszucki: ‘We want kids to have an opportunity for free play. Roblox allows them to get together, make their own rules, go together wherever they might want . . . and create together, build together, and in many cases, learn together.’