EXCLUSIVE: Only two thirds of parents currently intend to send their children back to school next month as poll shows voters believe Gavin Williamson is most to blame for education omnishambles

Just over two thirds of parents intend to send their children back to school when classrooms in England reopen next month – but almost a third do not feel comfortable with the restart.

The Government wants all pupils to return to class full-time in September but an exclusive poll for MailOnline suggests many parents are yet to be convinced it is safe.

Meanwhile, the survey conducted by Redfield & Wilton Strategies also showed voters believe Gavin Williamson is most to blame for the Government’s education omnishambles.

The Education Secretary continues to face calls for him to resign over his handling of the A-level and GCSE results furore.

However, he has signalled he wants to continue in the role long into the future while Boris Johnson has faced criticism for failing to pause his holiday in Scotland to take personal charge of the crisis. 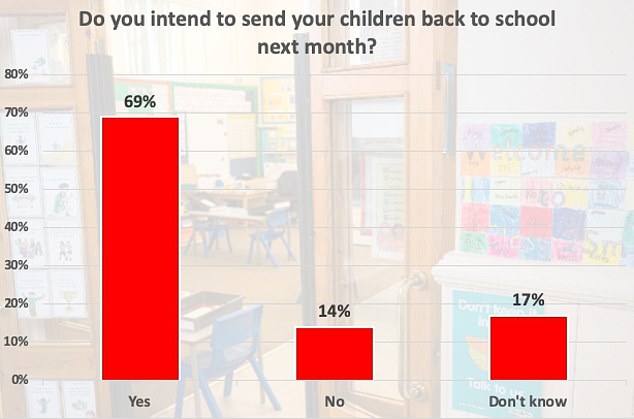 Pressure on Mr Williamson’s position comes as the Government prepares for the planned crunch return of all students to schools in England next month.

Today’s poll revealed that among parents with school age children, some 69 per cent intend to send their children back to school when classrooms reopen.

Just under half of parents – 49 per cent – said they feel comfortable with schools in England returning full-time for the start of the new academic year.

The numbers suggest Mr Williamson has a lot of work to do over the next two weeks in order to persuade all parents to send their children back to class as he tries to cling onto his job.

The Education Secretary sparked anger earlier this week after he initially tried to blame exam regulator Ofqual for the A-level results fiasco.

He subsequently performed a U-turn as he expressed full confidence in the regulator and its leadership.

Today’s poll, conducted on August 19, showed that voters believe it is Mr Williamson who is most to blame for the situation.

Some 38 per cent of respondents said the Education Secretary is most to blame while 16 per cent pointed the finger at Mr Johnson and Ofqual chief Sally Collier. 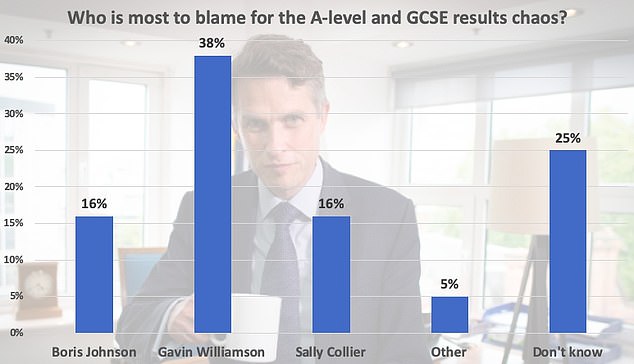 A quarter of respondents said they did not know who is most to blame for the fiasco which erupted after a controversial algorithm was used to calculate student grades before it was ditched in favour of teacher estimates after 40 per cent of grades were downgraded.

Tory MPs have called for Mr Williamson to be sacked over the row but Mr Johnson has stood by his Cabinet minister.

Some 36 per cent of people believe Mr Johnson’s decision to support Mr Williamson ‘shows the weakness of his leadership’ while 22 per cent said they believed it showed the PM’s strength.