– According to the coalition, the recent call for the sack of the service chiefs by the Senate is uncalled for

The Coalition for Nigeria Movement (CNM) on Thursday, August 20, said it has uncovered a plot by some desperate elements across Nigeria to destabilise the administration of President Muhammadu Buhari.

CNM alleged that some individual and groups plan to carry out their activities with the aid of the National Assembly.

Speaking at a press conference, the convener of the coalition, Sabo Odeh, said some “agents of darkness” have finalised three strategies against the administration of President Buhari.

Odeh alleged that the first strategy is to “raise motions on the floor of the hallowed chambers that the administration of President Muhammadu Buhari has failed Nigerians in the area of security”.

He said that the second one is that they plan to make bogus claims that appointees of the president are corrupt to taint his anti-corruption crusade in fulfilment of the desires of their sponsors who among other are out to discredit the president. 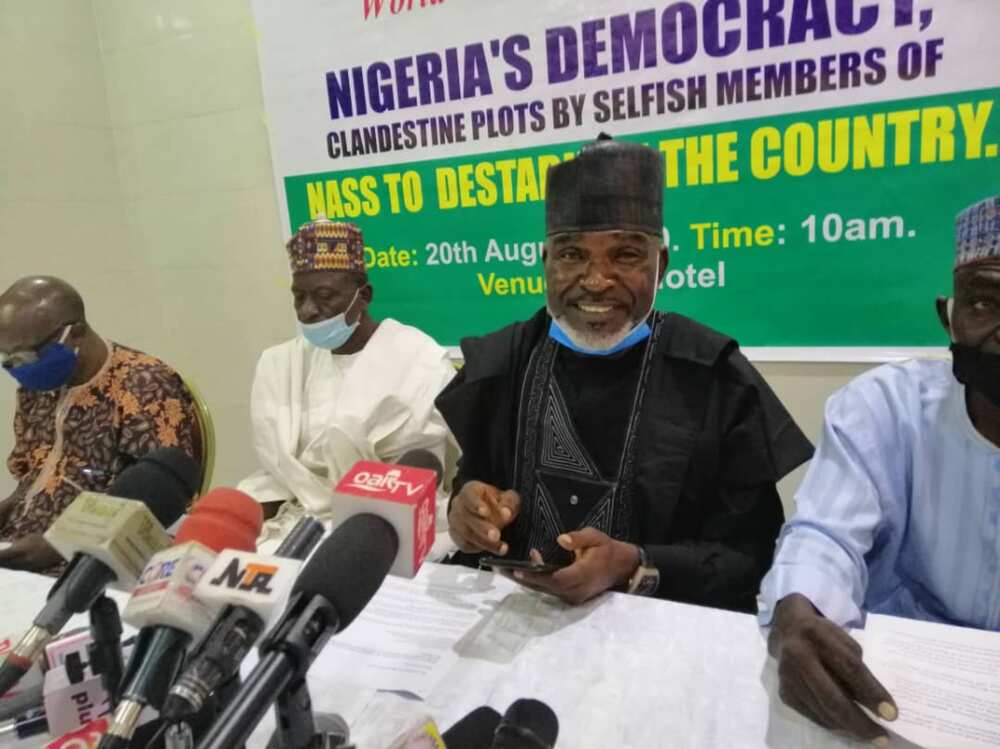 Odeh further disclosed that the final phase of the plan is a public instigation of youths across the country against the government citing untold hardship and insensitivity towards their plight as the reason.

Charging patriotic Nigerians and all relevant security agencies to rise in defence of the country at this critical period, Odeh warned the NASS and its allies to retrace their steps and respect the people’s mandate given to President Buhari in 2019.

The coalition further advised Nigerians to learn from the Mali experience as those calling for mutiny in the military do not and will never mean well for democracy.

“The recent events in the country indeed call for concern from all stakeholders with regards to the activities of some individuals and groups that have been involved in acts that are capable of undermining the territorial integrity of Nigeria,” Sabo said.

Meanwhile, Legit.ng previously reported that the Nigerian Senate on Friday, August 14, said it would pressure President Buhari to sack the service chiefs.

The Senate’s spokesperson, Ajibola Basiru, said the rising insecurity in the country led to the lawmakers’ decision.

Basiru said the various killings occurring in different parts of the country is saddening and must be curbed.

He also called on the service chiefs to step aside in order to allow fresh leadership structure nip the menace in the bud.