– The convicts were arrested for attempting to smuggle a total sum of $890,000 out of Nigeria

The Economic and Financial Crimes Commission (EFCC) has secured the conviction of two Lebanese citizens after they both pleaded guilty to a separate one-count charge of money laundering.

The anti-graft agency had told the Federal High Court sitting in Port Harcourt, Rivers state that Chamseddine Waell Mohammed and Dina Jihad Khali were arrested for attempting to smuggle a total sum of $890,000 out of Nigeria, through the Port Harcourt International Airport, Omagwa. 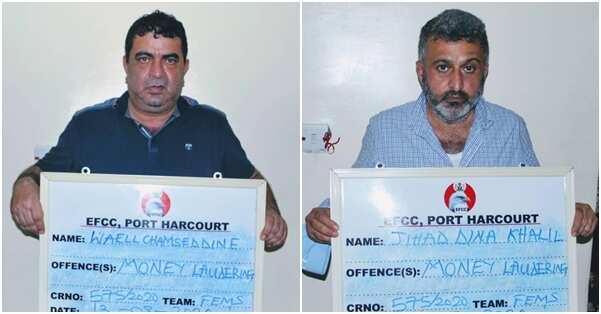 The anti-graft agency told the court that the said amount was found inside their Luggage onboard a chartered flight with registration number 9HVFF to Lebanon.

The prosecution prayed the court to convict and sentence the defendants as charged.

However, counsel to the defendants, Paul Ejiga urged the court to temper justice with mercy as the defendants were first time offenders who have no previous criminal record.

Justice Sani consequently convicted and sentenced the defendants to two years imprisonment with an option of fine of one million naira each. The undeclared amount was ordered forfeited to the federal government of Nigeria.

In another report, Wahab Shittu, lawyer of Ibrahim Magu, has denied the fresh allegation against the embattled chairman of the EFCC.

Magu’s lead counsel Shittu dismissed Wokoma’s claim, saying the allegation against the EFCC boss and his boys were fabricated.

In another news, following the prosecution of the EFCC, a Lagos state special offences court has sentenced an internet fraudster, Abiona Akinyemi Festus, to two years imprisonment.

The prosecution of Festus by the EFCC came after the Federal Bureau of Investigations of the United States (US) appealed to the commission to arrest him on the basis of his alleged involvement in a multi-million naira fraud, PR Nigeria reported.

One of the charges against the suspect was that he used a fake email address in 2011 to withdraw the sum of N5,950,000 from retirement accounts operated by an insurance company for public workers in the US.