An intensive care doctor working in Birmingham has said that putting the entire city under lockdown would be ‘risk averse’ because new cases are being driven by clusters in separate parts of the city.

Dr Ron Daniels, who works for University Hospitals Birmingham, told BBC Radio 4’s Today programme that the increase in coronavirus cases is not a city-wide problem.

Official figures show Birmingham’s infection rate has more than doubled over the past fortnight to around 25 new cases for every 100,00 people. A handful of wards are seeing a similar amount of new infections, according to government data.

It comes after Health Secretary Matt Hancock yesterday chaired a ‘Gold Command’ meeting to discuss the potential of Birmingham being placed under lockdown.

Council bosses who attended the meeting were desperate to prevent further damage to the already-crippled local economy by avoiding tougher measures like ones imposed in the North West and Leicester.

Birmingham is expected to be placed on a national ‘watch list’ from today, meaning it will be offered ‘enhanced support’ to avoid further cases.

Local health bosses warned residents of the city — 1.1million people — that ‘what we do in the next seven days will decide if we go into lockdown or not’.

Ministers are also expected to announce an update on whether tougher measures will be needed for Oldham, Blackburn and Pendle, where cases were rising. 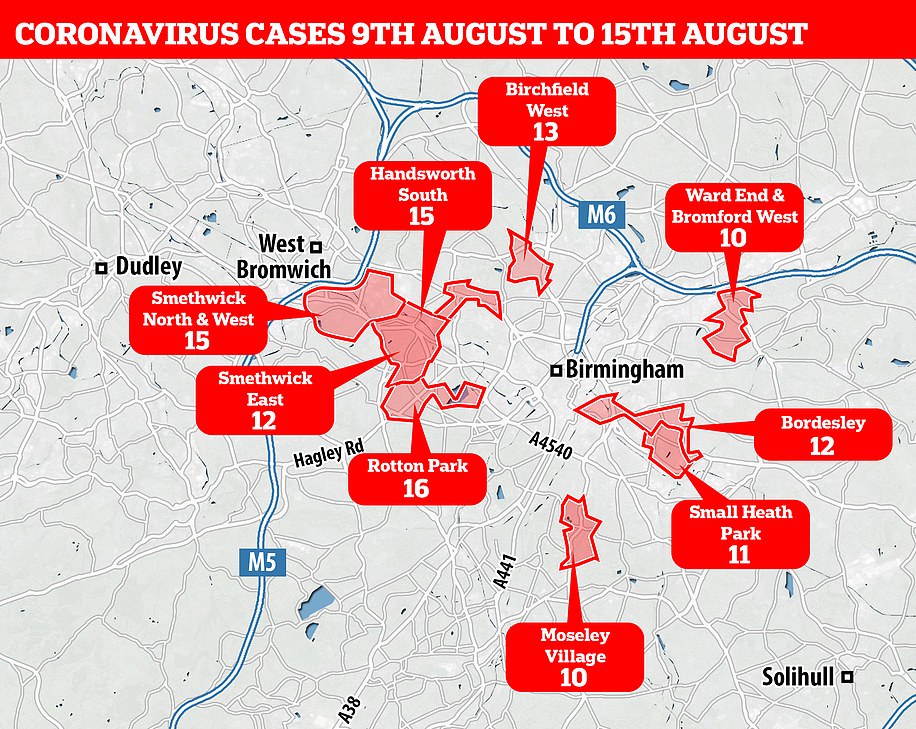 In-depth government statistics, which are published on a map by the Department of Health, show no specific wards in Birmingham are responsible for the city’s soaring infection rate 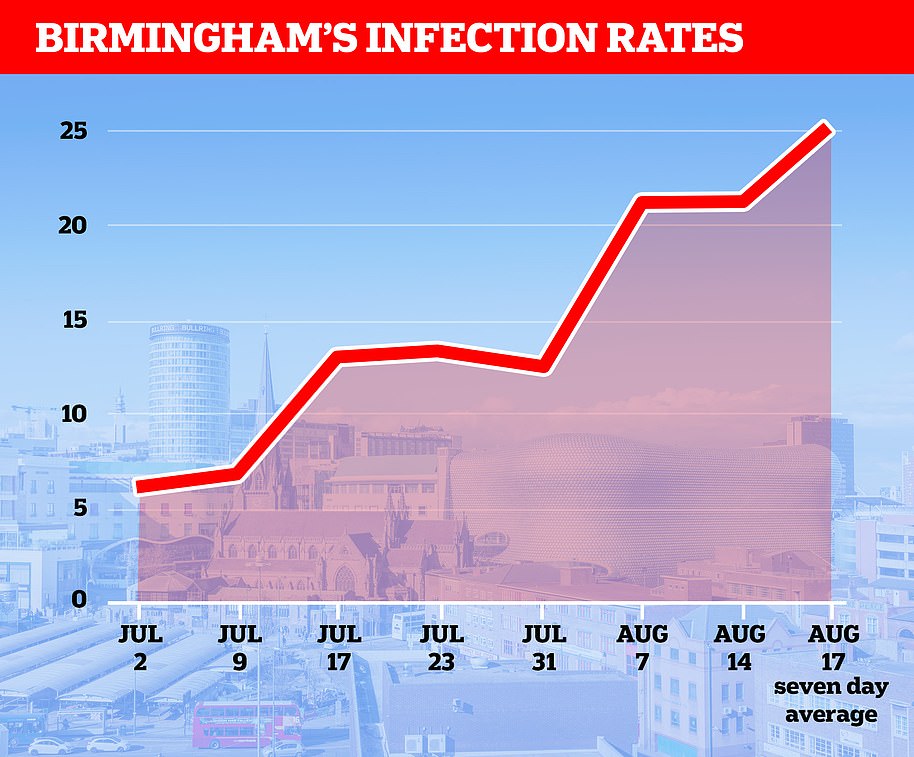 Dr Daniels said: ‘We can’t yet let our guard down against this virus. But the reality is we are seeing regions, and this is not a city-wide problem in Birmingham – these are clusters, they are outbreaks.

‘We need to look very carefully at where we’re seeing localised clusters, localised outbreaks, and we need to consider actions in those regions.

‘But to apply a city-wide lockdown seems a little risk-averse right now to me.

‘And the reason I say that is we are testing more people, that will partly account for the increased number of cases of course, but there are other factors that don’t seem to be being considered.’

‘We’ve seen cases go up since the beginning of July, and still our hospitals are relatively empty of patients with this condition.’

In-depth government statistics, which are published on a map by the Department of Health, show no specific ward in Birmingham is responsible for the city’s soaring infection rate but a handful all have recorded several cases.

The most up-to-date figures for the postcode map show Rotton Park — in the west of the city and on the border of neighbouring Sandwell — saw the most cases between August 9 and 15 (16).

Sandwell, which borders Birmingham, Dudley, Walsall and Wolverhampton, is currently one of the 20 worst-hit places in England with an infection rate of 21.1 cases for every 100,000 people.

Fifteen cases were recorded in Handsworth South and 13 in Birchfield West. While 12 people were diagnosed with Covid-19 in Bordesley and 11 in neighbouring Small Heath Park, both of which are located just to the east of the city centre.

Thirty-six cases were diagnosed in the three boroughs of Smethwick, which is technically classed as being in the local government authority of Sandwell and not Birmingham.