– The Ekiti state House of Assembly has suspended the chairman of Ikere local government, Femi Ayodele

– Ayodele was suspended on Friday, August 21, by the House over alleged unathorised presidential campaign posters for Governor Fayemi

– The decision followed a motion moved by the majority leader of the House, Gboyega Aribisogan

The chairman of Ikere local government, Femi Ayodele has been suspended by the Ekiti state House of Assembly over an alleged unauthorised presidential campaign posters for Governor Kayode Fayemi.

The Nation reports that Ayodele had sponsored campaign posters canvassing for Governor Fayemi to contest as a presidential candidate under the platform of the All Progressive Congress (APC) in 2023.

Legit.ng gathered that the posters, which have become subject of political debates and innuendos on different platforms, showed Governor Fayemi clad in an adorable sky blue Agbada with a blue striped Awolowo cap.

The message on the posters with APC logo reads: “Support His Excellency Dr. John Kayode Fayemi for President 2023.” 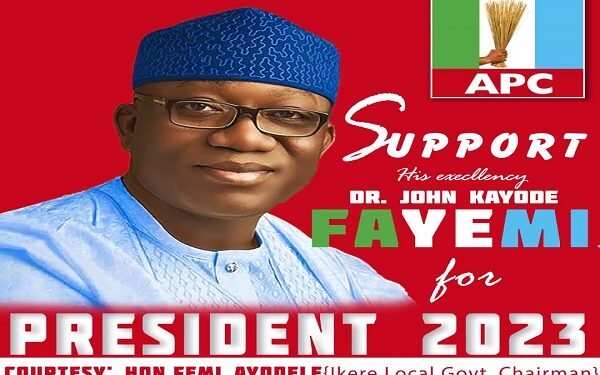 The council chairman was suspended unanimously by the lawmakers at the Assembly’s plenary presided over by the speaker, Funminiyi Afuye on Friday, August 21.

The decision followed a motion moved by the majority leader of the House, Gboyega Aribisogan and seconded by Tajudeen Akingbolu representing Ekiti West constituency 1.

The motion was entitled: “Calling for investigation into the alleged unsolicited and unauthorised campaign in the media in flagrant disregard to Extant Regulations by Chairman, Ikere Local Government Area, Mr. Femi Ayodele.”

The lawmakers through a resolution unanimously suspended the council chairman, pending the completion of the House’s investigation on the matter.

The Assembly also committed the matter to its House committee on local government and chieftaincy affairs for a thorough investigation.

The speaker who hailed from the same council with Ayodele directed the ad-hoc committee to submit its report to the House within one week.

The House later adjourned the sitting to Monday, August 24.

Meanwhile, Legit.ng had previously reported that it was a shock for some Nigerians to find the campaign poster of Governor Kayode Fayemi ahead of 2023 presidential election online.

It was reported that the posters were spread on social media by Femi Ayodele. He told journalists that the Ekiti governor’s credentials as a politician made him very suitable for the office.

2023 election: Why a northerner should be President again – Shettima | – on Legit TV