– Sophisticated gadgets including laptops, phones and one Toyota Venza were recovered by the EFCC operatives

The anti-graft commission made this known in a statement on Friday, August 21, adding that the suspects were apprehended following “volunteered intelligence by concerned residents of the area.

“The suspects were picked up by the operatives of the Commission at their hideouts in Room 202, Seftec Hotels, behind NNPC’s mega petrol filling station, Minna, Niger State, for their alleged involvement in a love scam and other internet-related crimes,” part of the statement read.

Items recovered from the suspects by the commission’s Abuja zonal office operatives include one Toyota Venza, different laptops and exotic phones. 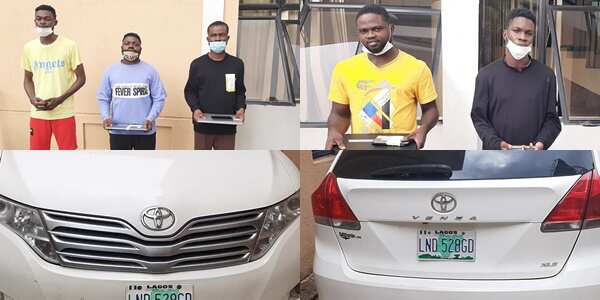 The anti-graft commission said the suspected fraudsters will be arraigned in court after the conclusion of the investigation.

EFCC made this disclosure barely hours after the agency said it arrested four students of the University of Port Harcourt for their alleged involvement in internet fraud.

They were picked up on Thursday, August 20, from their hideout at Chibiak Avenue, Elenpranwo, Ada George, Port Harcourt.

In a related development, EFCC said it has secured the conviction of two Lebanese citizens after they both pleaded guilty to a separate one-count charge of money laundering.

The anti-graft agency told the Federal High Court sitting in Port Harcourt, Rivers state that Chamseddine Waell Mohammed and Dina Jihad Khalil were arrested for attempting to smuggle a total sum of $890,000 out of Nigeria.

The anti-graft agency said the noted amount was found inside their luggage on board a chartered flight with the registration number 9HVFF to Lebanon.