– The Edo stte First Lady, Mrs Betsy Obaseki has not slowed down in her campaign for the PDP

Edo state First Lady, Mrs Betsy Obaseki, has urged residents of the state to be ready to exercise their franchise and not be intimidated by those who are boasting that they will use federal might to impose an unpopular candidate on them.

Mrs Obaseki gave the assurance in Benin city, the state capital, when leaders of tricycle drivers and motorcycle riders in the three senatorial districts of the state paid her a courtesy call at the Edo state government house. 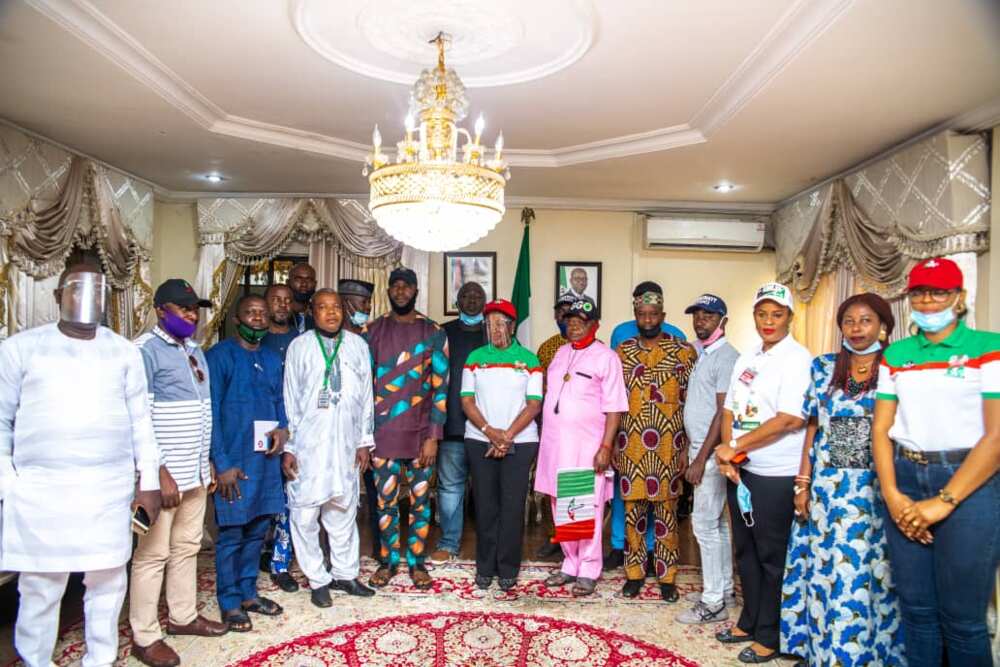 Members of the delegation pose for a photo with the First Lady during their visit. Photo credit: @EdoStateGovt
Source: Facebook

Her words: “President Muhammadu Buhari will not be party to illegality as he is a law-abiding citizen, who loves the people and will not put the interest of a few lawless individuals above that of the majority.

“Nobody can impose somebody on you. Let nobody intimidate you with federal might. We have a law-abiding, peace-loving president who will not allow anarchy. He loves his country, Nigeria, more than anything and he wants progress for his country.

“He is not like the crazy lot who don’t care about anything else but themselves and are ready to destroy anything and everything in order to get what they want. Our president is not like that.”

Legit.ng had earlier reported that Edo First Lady, Betsy Obaseki, recently met with wives of Dukes (Enigies) in the state to sensitise them to the need to re-elect Governor Obaseki.

Meanwhile, the Peoples Democratic Party in Edo state has raised the alarm over the politically motivated deployment of Mr Adeyinka Fasiu Ayinla as the state commandant of the Nigeria Security and Civil Defense Corps.

In a statement sent to journalists on Thursday, August 20 by its spokesman, Chris Osa Nehikhare, the party said it totally rejects the deployment of Mr Ayinla to the state in the run-up to the polls, scheduled for Saturday, September 19.

“The posting by the minister of interior, Ogbeni Rauf Aregbesola, is politically motivated and a plot to rig the governorship election,” the party said.