A science teacher who has Tourette’s syndrome has been branded ‘inspirational’ ‘amazing’ and ’empowering’ after sharing her story in a new documentary.

Natalie Davidson, 38, from Birmingham, has Coprolalia Tourette Syndrome, which causes her to have tics and swear during lessons.

The syndrome has lead to her calling students a ‘billy ball bag’ and shouting ‘f*** it, f*** it, you tart’ while teaching chemistry.

She shared her story on a Channel 5’s The Teacher with Tourette’s which aired last night, where viewers branded her ‘phenomenal’ and ‘brave’.

‘The Teacher with Tourette’s is an amazing empowering story of diversity. What an incredible woman.

‘Astounding that it’s the teachers uncomfortable with her Tourette’s making her eat alone in isolation yet the pupils are more than comfortable and accepting. What a role model she is,’ wrote one. 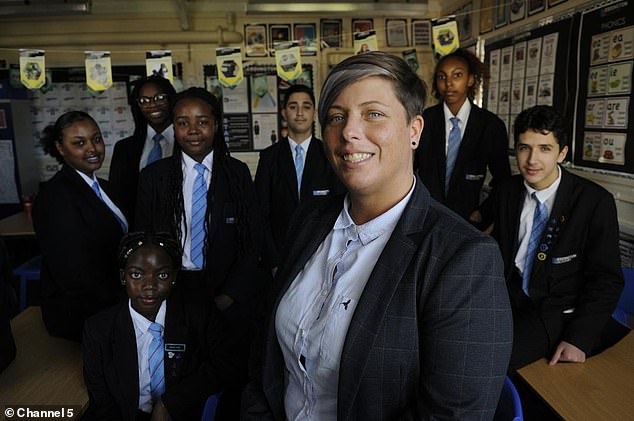 Natalie Davidson, 38, from Birmingham, has Coprolalia Tourette Syndrome, which causes her to have tics and swear during lessons. She is pictured with her class

While the teenagers she teaches are understanding of the neurological condition adults aren’t as forgiving, meaning Natalie often eats lunch alone as fellow teachers  at Erdington Academy in the north of the second city don’t tolerate her swearing.

‘My Tourette’s is quicker than me, smarter than me, funnier than me and will always try to get me in trouble. He’s a little f***er,’ Natalie joked in the show.

WHAT IS TOURETTE’S SYNDROME?

Tourette’s syndrome is a neurological condition characterised by a combination of involuntary noises and movements called tics.

It usually starts during childhood and continues into adulthood. Tics can be either be vocal or physical.

Tourette’s syndrome is named after the French doctor, Georges Gilles de la Tourette, who first described the syndrome and its symptoms in the 19th century.

There’s no cure for Tourette’s syndrome, but treatment can help to control the symptoms.

‘I’ve been arrested and treated quite badly in a sense of explaining I had Tourette’s but it not being understood.

‘I’ve been hit, chased. Anything you do outside of your normal routines and places you visit is going to be a challenge.’

Tourette’s affects around 300,000 people in the UK, but only 10 per cent of sufferers – including Natalie-  have Coprolalia, which causes the involuntary urge to swear.

Natalie is the only teacher in the UK with the condition.

For many, Tourette’s begins in early childhood, around the age of seven, but for some – including Natalie – it’s caused by an severe trauma in adulthood.

‘It was just before my 21st birthday. Someone got into my university house and raped me,’ Natalie explained.

‘I was being interviewed [by the police] and it was on camera and I remember them having to keep pausing filming the interview because I kept having hiccup noises and strange sounds that I’d never made before.

‘I honestly thought what had happened to me had made me go a little mad.’

Over the years, her tics got worse, but this didn’t stop her dream of becoming a teacher, and she began her career supply teaching just a year later. 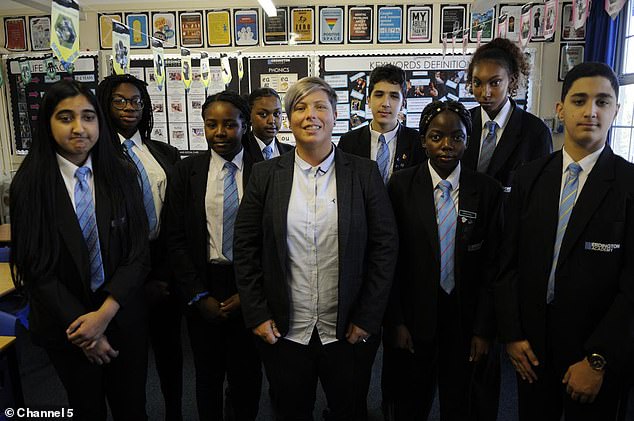 While the teenagers she teaches (pictured together) are understanding of the neurological condition adults aren’t as forgiving, meaning Natalie often eats lunch alone as fellow teachers at Erdington Academy don’t tolerate her swearing

While, most of Natalie’s fellow teachers support her, many feel uncomfortable around her and she often takes her lunch breaks alone in her classroom.

‘But facing the feeling you need to be hidden away is a horrible feeling. It’s put fear, anxiety and panic inside me and I don’t know where I go from here.’

As is common with  Tourette’s, Natalie also suffers from ADHD and OCD which can cause obsessive thinking and paranoid thoughts.

The teacher has occasionally had panic attack and been forced to leave her class and take sick leave.

Viewers were touched by Natalie’s story calling her an inspiration to the next generation, with dozens tweeting their support

Viewers were  touched by Natalie’s story calling her an inspiration to the next generation.

‘Natalie you are a star and an inspiration lady. You have a challenging job, even without your Tourette’s. You still try your best. I hope one day you can get some help that works for you, so you get some proper rest,’ wrote one.

‘Broke my heart when Natalie said she sits by herself for lunch because the other teachers don’t like her swearing. Thought they’d be more understanding. Natalie seems like a lovely person,’ added another.

‘Natalie is teaching young people a very valuable life lesson of equality, what an inspiration! To anybody not agreeing with this, our young people deserve to see reality and resilience. Hardship is real life and she is a role model if ever I’ve seen one,’ a third tweeted. 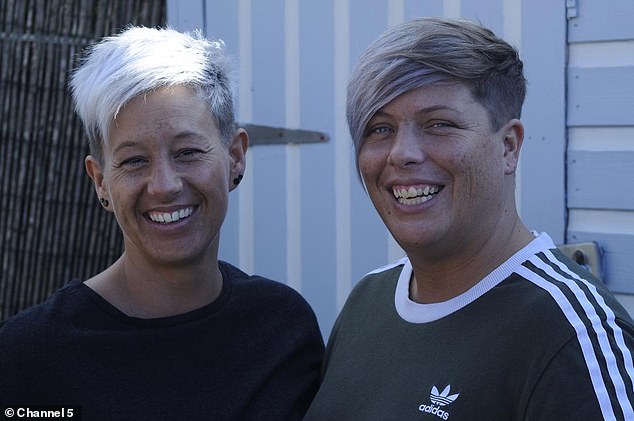 Natalie is pictured with her wife Leigh-Anne who she married last year. She says her wife made her feel more comfortable in herself

‘Natalie, you are amazing. I’m a teacher too and I am so impressed – deeply saddened by the worries that you have shared of not being accepted by some however – You must make sure you never feel you have to hide away in your classroom – you’re fab!’ a fellow teacher tweeted.

‘Natalie is amazing. Think its sad the other teachers don’t accept her condition, yet the kids seem to deal fine! Secondary school yes but think the condition would be an issue in primary school. The kids probably swear more than her in Secondary school,’ added another.

‘Genuinely breaks my heart that Natalie eats lunch in her classroom on her own because the other teachers are “uncomfortable” around her. Teachers, not students. Grown adults. Adults that teach children to be kind, inclusive and understanding. Sad’ said one. 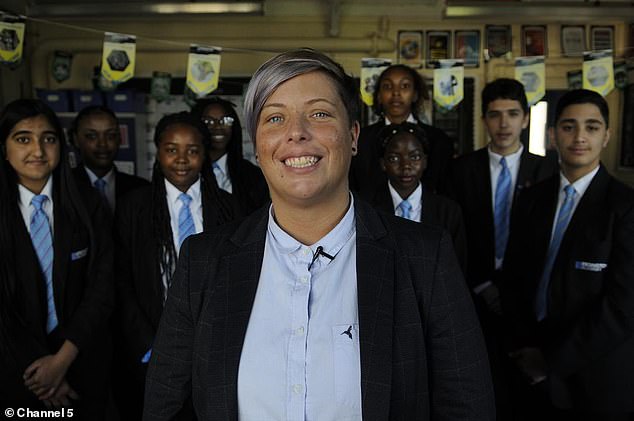 As is common with Tourette’s, Natalie also suffers from ADHD and OCD which can cause obsessive thinking and paranoid thoughts. The teacher has occasionally had panic attack and been forced to leave her class and take sick leave