– BBNaija’s Tacha has expressed excitement at her recent win

– The BBNaija star said the best revenge is massive success

Many months after being evicted from the Big Brother Naija house, Natcha Akide popularly called Tacha continues to win on all fronts.

From selling out her products to bagging endorsement deals, the former reality TV star still enjoys the love and support of her loyal fans.

Recently, the controversial Pepper Dem housemate took to her official Instagram page to show off three awards that she bagged at Scream All Youth Awards 2020.

Scream Awards is said to be the biggest all youth awards in West Africa. Its first-ever virtual live awards in Nigeria held a few days ago. 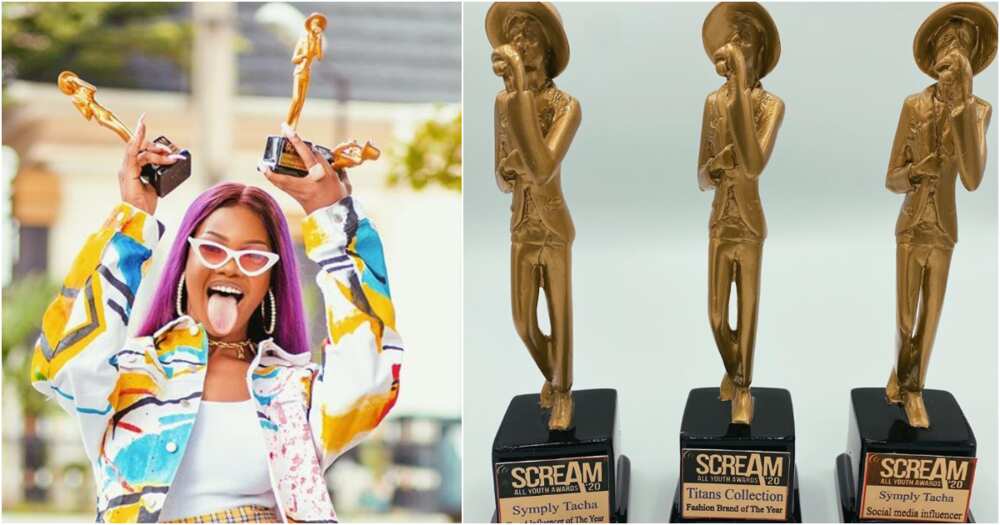 She was in an over joyous mood when the third category was announced as she danced and celebrated happily when she joined in.

The BBNaija star excitedly shared photos of her awards online. According to her, the best revenge is massive success. She also urged her fans and followers to take a moment to appreciate how far they have come.

See the photos below. Swipe left to see more:

As expected, fans and followers took to her comment section to congratulate her.

tolexycollection: “Proud of you boo.”

The latest song by Kizz Daniel – Jaho will bless you

tasila_phiri: “Am so proud of you baby girl. You deserve all the good things coming your way!”

In other news, Legit.ng earlier reported that Tacha said she never gossiped about anyone in the BBNaija house.

According to her, everybody gossiped about each other except her.

Venita reacted to Tacha’s statement by saying that even though she didn’t stay very long in the house, she heard things that the controversial housemate said about her that weren’t true.

But Tacha argued that she didn’t say anything behind her back.