– The 17-year-old has signed under Jorge Mendes

The teenager put Guinea-Bissau on the world’s football map last term after making his debut for the Catalans at 16 years and 298 days – becoming the second-youngest player to debut for the club.

He scored eight goals and one assist in 33 appearances for the Blaugrana across competitions in his maiden season.

After breaking into Barca’s first team, the 17-year-old signed up with Rodrigo according to SunSport but another report from Marca claims he trusts Mendes to look out for his future. 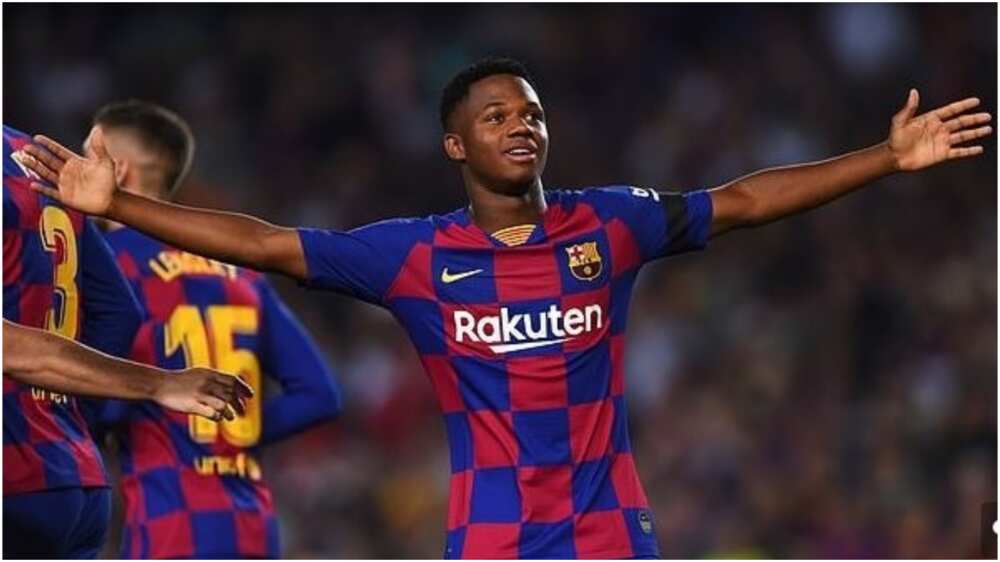 Sources close to the player suggest that the youngster could be close to landing an improved deal to reflect his importance in the team.

Fati showed so much prospects last term and he could become an integral part of Ronaldo Koeman’s squad next season.

The Sun reveals that his release clause could rise to a whopping £170million once he turns 18 in October.

Earlier this year he became the youngest player in LaLiga history to score twice in a game and also Barcelona’s youngest ever goalscorer after netting against Osasuna in LaLiga at the end of August.

Meanwhile, Premier League giants Manchester United have been linked with a move for the player in an audacious deal.

Legit.ng earlier reported that Manchester United are doing everything possible to quickly complete the signing of 17-year-old Ansu Fati from Barcelona before the La Liga club increases his buyout clause.

Barcelona are reportedly prepared to raise the Guniea-Bissau born star’s buyout clause to a staggering £360million.

The Red Devils have reportedly prepared an £89million bid for the youngster which was rejected by the Catalan club.