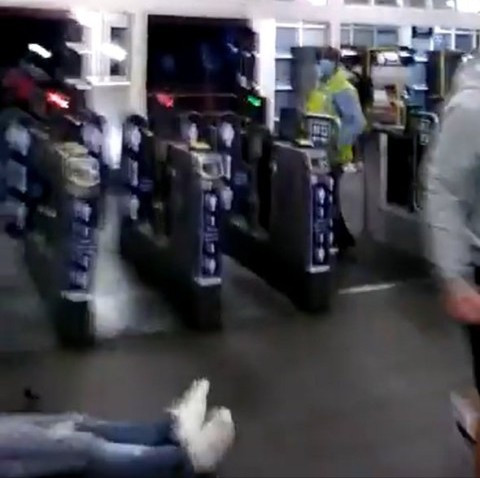 A man was knocked out during an argument about face masks at a London railway station.

William (not his real name) was punched by a fellow passenger at Clapham Junction and required hospital treatment for a severe laceration and stitches for a head wound.

William, who was with a friend, had been arguing with South Western Railway staff by the ticket barrier because one member was not wearing a mask.

Footage taken by the friend shows a white man in a grey hoodie pushing a pram past the heated exchange. He had a child with him and was also not wearing a mask.

William is heard saying, ‘you’re not wearing one either.’

In response, the man turns around and walks away from his pram shouting “don’t f***ing start on me” and punches William, knocking him to the floor unconscious.

The man quickly leaves the area with his pram and child, while William is seen bleeding on the ground.

A member of rail staff is heard saying: “I told you both to go didn’t I?”

South Western Railway said the member of staff who was not wearing a mask had a medical exemption.

Watch the video below.